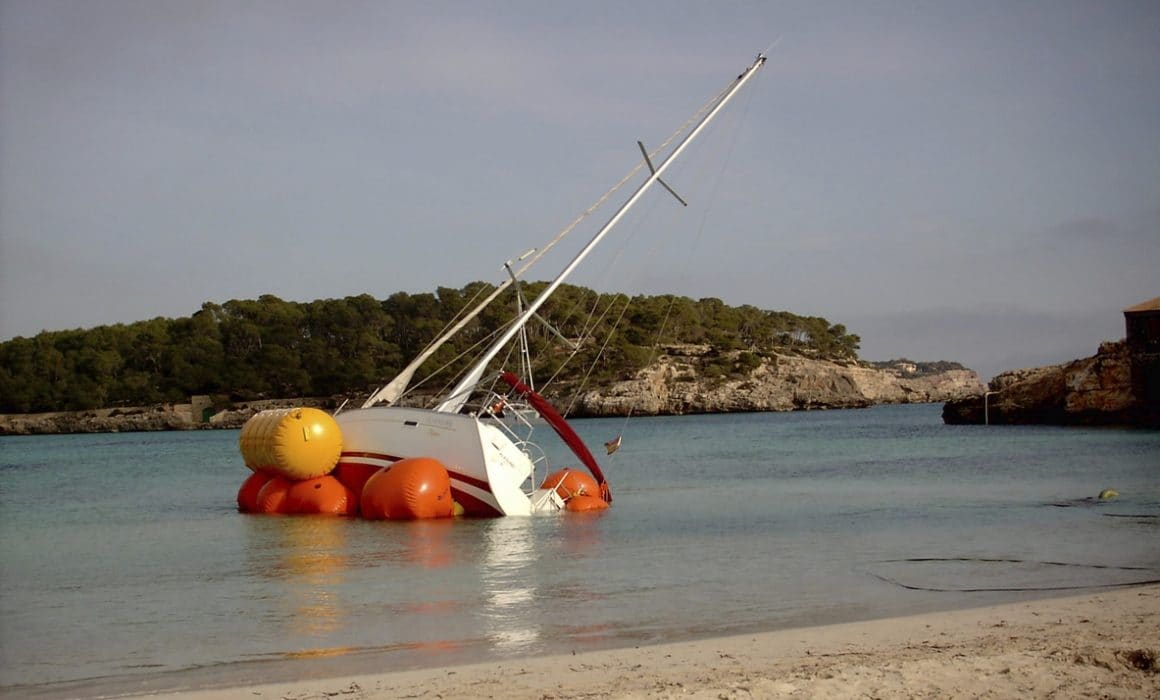 There are some tricky legal issues with personal injury claims arising from boating accidents – like establishing negligence and liability when the accident was caused by a wave.

Boating is great fun, but sometimes accidents happen. If you get hurt while on a pleasure boat, and are wondering what your legal rights are, here are some things that you should know.

If you get injured on a motorboat or a sailboat, you must be able to prove that your injury resulted from someone’s negligence in order to be able to recover damages from that person. The fact that you got hurt does not mean that anyone was negligent. Negligence is the failure to act with reasonable care. This means that you and your lawyer must be able to prove that someone failed to act with reasonable care, and that, as a result of that negligence, you got hurt.

Collision with Another Boat

In a collision between two motorboats, both boats’ operators will usually be at least partly at fault. Thus, injured passengers on either of the boats would have a legal case against the operators of both boats, much like in a car accident case. If one of the operators was injured, he or she would only have a claim against the other operator if the injured operator was less than fifty percent responsible for the collision. In a collision between a sailboat and a motorboat, the motorboat is more likely to be at fault than the sailboat because safe boating practices, often called “The Rules of the Road,” require motorboats to keep out of the way of sailboats.

When a boat hits a big wake or wave, the jolt to the boat can knock the passengers down or throw them out of their seat or overboard. Legal liability for a wake accident is not always clear cut. Federal and state boating laws and regulations, as well as safe boating practices, require the boat’s operator to keep a proper lookout for anything that might be a hazard to his or her boat and passengers. But the operator’s liability in a wake accident will generally depend on the circumstances, such as the following:

The operator of the boat that created the wake may also be negligent, depending on the accident location and the boating traffic in the area. If, for example, the boats were in a no wake zone (usually found in marinas and in inner harbors), then any wake violates the boating safety rules, and the operator would be negligent. If the boat was zipping through a crowded area and leaving behind a large wake, the operator may be found negligent for creating too large of a wake for the area. But if the accident occurred in an isolated area, then the other operator is unlikely to be at fault.

A wave accident is similar to a wake accident except that there is no other boat to hold liable. So whether the boat’s operator was negligent will generally depend on the circumstances described above.

Collision With a Submerged Object, a Rock, or The Land

Even in the best of weather and visibility, the boat can hit a submerged object or a rock. In poor weather and poor visibility, boats can run aground or hit a jetty or the coastline. The operator’s liability for a collision with a fixed object will depend on the circumstances. If, for example, the operator has nautical charts for the area, is traveling slowly and cautiously, and hits a rock, he or she is probably not going to be found negligent. But if he or she is zooming along in dense fog, without charts or a GPS, and runs into a jetty, that is negligence.

Failure to Have Proper Safety Equipment on Board

Federal and state boating safety laws and regulations require even small pleasure boats to have various kinds of safety equipment on board, such as life jackets for each passenger, throwable life rings, navigational lights, flares, loud whistles, and fire extinguishers. While failure to have the proper safety equipment on board will probably not cause an accident, it can hamper the rescue efforts afterward. If the boat becomes disabled, flares and whistles allow the passengers to signal passing boats. If someone falls overboard, life jackets and life rings make it much easier to get that person back on board. The lack of proper safety equipment on board could lead to a claim of negligence against the boat’s owner.

Damages Available in an Injury Lawsuit

Just like in a car accident lawsuit, if a boater acted negligently and you became injured as a result, you are entitled to damages. Your damages may include the reasonable value of your medical bills, your lost earnings and lost earning capacity, and pain and suffering.

How Insurance Coverage Affects Your Case

boat accident
*None of the content is meant to be construed as legal advice.